This is my first article for our new cosplay page on thenerdery.net. For this first article, I want to take the time to discuss something that’s become a pretty serious issue in the wonderful world of costumes, makeup, and fun. Cosplay shaming is a real thing. It literally hurts me to type that sentence.

Cosplay shaming is a real thing. 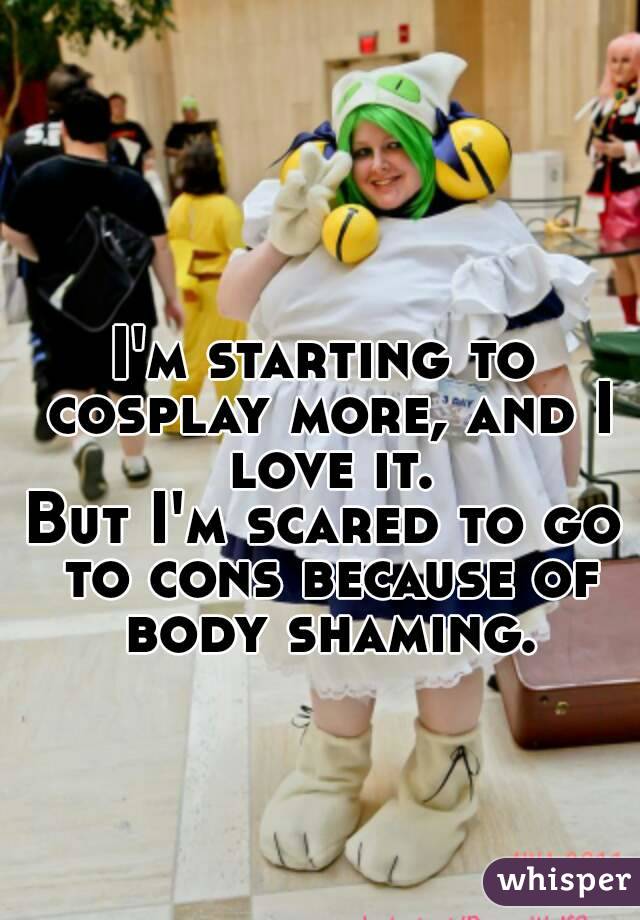 For those of you who may not be aware, cosplay is the practice of dressing up as a fictional character from a movie, book, video game, manga, or comic book. People have many different reasons for choosing to cosplay in the first place, and that personal reason varies from person to person. As for me, I remember going to my first comic convention. I was actually pretty surprised at how many people were walking around dressed up as their favorite movie characters and comic book heroes. I loved it! It was so cool to see people passionate enough about these characters to put their heart and soul into these outfits, not to mention the time and money involved in most of them. I also noticed pretty quickly that all the people in costume seemed to be having a much better time than the people who were just walking around taking in the sights. I immediately wanted to be a part of their world.

I’m on the smaller side of the female spectrum, and I cosplayed as Harley Quinn from the new Suicide Squad movie for my first time. I’ll admit, I had my reservations at first, considering that the shorts covered less than your average bikini bottoms. I have given birth to two children in my life, and I’m definitely no Margot Robbie. However, my costume was really well received, and more people than I could count stopped to take a photo with me. It was a great feeling, end I had a really enjoyable experience. However, not all cosplayers receive equal treatment. Not everyone who braves the world of cosplay walks out of the convention with a smile on their face.

I didn’t realize cosplay shaming was a real thing until my husband told me about it. In my mind, the people that went to these conventions were the best kind of people – nerds. I’m defining a nerd here as someone who becomes extremely passionate about things that spark their interest. Nerds are people who delve into the world of fiction and fantasy wholeheartedly, who feel connections with the morals and values set forth in the worlds of superheroes and villains. In my mind, this meant nerds were good people. Apparently this is not always the case.

I guess in any world, any genre, any gathering of people, you’re going to have some assholes. This seems to be the case with cosplay as well. I have been shocked and dismayed at some of the comments I’ve seen online. I’ve seen things like, “Nobody wants to see a whale in a wonder woman costume” and “If you choose to be fat, you should choose to be a fat character, or don’t cosplay at all.” What. The. Fuck? I think the whole point of cosplay is being missed here. Cosplay is about having fun. It’s about showing spirit and love for a character that you care about, a character you can relate to. It’s also about getting out of your own skin for a day and becoming someone else. It’s all the fun of Halloween without the stomach ache from all the sweets. So who in the hell decided there had to be rules on that? What kind of self-entitled prick honestly thinks they have any right to determine what other people wear on their bodies?

People can seriously be dicks. And that sucks, but it’s a true statement. But no one has any right to tell someone else what they should be doing different when it comes to what they wear or what their bodies look like. If you see someone dressed up at a convention, and you don’t think their outfit works with their body type, move on. Get over it. You are not affected by their decisions. Also, comments like “Nobody wants to see that” suck. You don’t get to speak for everyone. If you want full control over what you are going to look at, stay home and watch Netflix. Don’t put yourself in a situation where you’re going to see other people with opinions and thoughts and bodies that do not reflect your own.

The same goes for anyone you see that may be cosplaying as a race that does not match their own, or a gender that they do not appear to be. These are people who find joy in specific characters, enough so that they are willing to dress up as the ones they like, not just the ones they look like. Cosplay should be fun. It should be exciting. No one should ever have to stare into a mirror that morning and consider whether or not they should walk out the door. That should never have to be a question in their minds.

As for those of you who may have made some of these off-color comments in the past, or

To those of you who think it’s great that people dress up as the characters they love, regardless of whether their race, gender or weight, I have a favor to ask of you, too. The next time you see someone cosplaying at a convention, or movie showing, or just walking down the street, especially if they look like they’ve gone outside of their comfort zone for this costume, go up and compliment them on a job well done. Ask them if you can get a quick selfie, because you love their outfit. You could be the deciding factor on the outcome of their day. You could singlehandedly repair some of the damage done by the dickheads they may have encountered already. You could be their hero.

And for those of you who are considering cosplay, but are afraid of doing the character you want out of fear for ridicule, you have my support. You have the support of the entire Nerdery. And honestly, you have much more support than you realize. There is a very small fraction of people who actually shame cosplayers out there. The rest of us are behind you 100%, and we’d be happy to see you there.

Cosplayers are willing to share their devotion with the whole world, no matter what anyone else thinks. These people are putting their hearts and souls into their passion, and they are nervously braving a situation where they know there is a chance of condescension and ridicule. But they do it anyway. Because their love for the characters outweighs their need to be accepted or even understood. These people take pride in what they do. These people have courage. These people have heart. And they are my heroes. Published by The Nerdery

View all posts by The Nerdery

9 thoughts on “Cosplay Shaming is a Real Thing”

Don't miss out on our biggest giveaway this year!! CLICK HERE TO VOTE NOW!!!

BREAKING: Will Jackman Put The Claws Back On?

The Classic Is Making A Comeback